Get closer to Harry Potter and breathe in the scene you are ever so familiar with as a whole new Harry Potter themed retail experience is happening right now at Siam Paragon in Bangkok. This is really exciting as it is the first international debut after Utah, USA and will last through to 2 March, 2018.

I’m so glad the organisers chose Asia as we have such a strong fan base plus its not as accessible for us compared to USA where you can go to The Wizarding World of Harry Potter in Orlando or Los Angeles.

I have personally been to the one in Orlando and I find this retail experience very similar from the decorations to the feel of it. Its as good as you being a Hogwarts student living in the Wizarding World of Harry Potter shopping in Hogsmeade, choosing your wand for the first time, picking out your pet, stationeries, and etc. The iconic Harry Potter music playing in the background just brings the whole experience together and really creates the atmosphere.

Now, what’s a wizarding world without magic and flying objects? You will also see that element in this retail experience as display windows features items like flying papers in Tomes and Scrolls and rotating cupcakes in Madam Puddifoot’s.

One of my favourite part is new merchandises and scene from Fantastic Beast with the most unforgettable shine and glitter addict, Niffler. Oh how I wish this creature is real, he’s just too adorable! I guess a Niffler plushie will have to do. 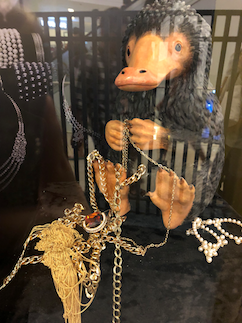 And the largest chocolate frog in Honeydukes.

Note the theme of Christmas in the Wizarding World, so the whole retail space is decorated with Christmas element like snow capped roofs and trees with that bit of jolly red.

The key attraction in this retail experience is none other than Ollivanders, the maker of fine wands where you get to enjoy an enactment from the Harry Potter scene where students purchase their first wand and have the wand match them. The special highlight here is the falling snow once one has matched with the right wand.

Other than Ollivanders, there’s also a mock Quidditch game to play, green screen photo where you get to choose 4 different Harry Potter backgrounds, and some other things for you to explore.

I couldn’t have asked for a better way to end 2017 by having the chance to meet an actual cast from Harry Potter. Not just anybody, its the Weasley twins! Aside from the 3 main characters, the Weasley twins has got to be my next favourite in Harry Potter, especially etched in my mind was the scene from Harry Potter and The Order of the Phoenix where Fred and George Weasley created some chaos in the exam hall against Dolores Umbridge, much to the delight of fellow students cheering in approval.

The Weasley twins really brought so much joy in the Harry Potter franchise and its amazing to meet them in person. Dream come true!

Don’t miss it! If you are going to Bangkok within the period till 2 March, 2018, definitely head down to take a look and buy yourself some Harry Potter goodies.