Katong in Singapore is very famous for their Laksa and they have opened branch after branch all over Singapore. This stall found in Tanjong Katong Road has introduced many to a whole new type of wanton noodles. Wanton noodles is a perennial Cantonese noodle dish that is loved by many in Singapore. You can order it dry or in soup and both are equally good!

A typical wanton noodle dish is served with yellow egg noodles, together with wantons, char siew and garnished with some leafy vegetables and fried pork lard. For Eng’s Noodle House wanton noodles, the fried pork lard is actually in a container at a little counter where you can take as much as you like! For many of us, that is actually a dream come true because usually there would only be a few small pathetic pieces in other wanton noodles.

The star of Eng’s Noodle House is actually the chilli! Other than the ‘take as much as you want fried pork lard.’  Yes, the chilli. A lot of Singaporeans enjoy spicy food and many of us eat chilli with almost everything! However, the chilli at Eng’s Noodle House is even better. The chilli is so spicy, to the point that a little warning note is wrapped around the chilli bottle! Just imagine, a few drops of that chilli is able to spice up the noodles. What would a full bottle do?! 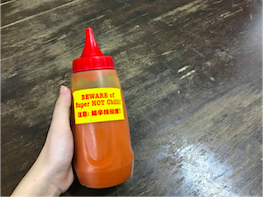 Of course, what makes these wanton noodles so good is not only the chilli itself, but the noodles, wanton, and the char siew.

Before you tuck in, do make sure to toss and mix your noodles as there is sauce at the bottom of the noodles. By doing so, you are mixing the sauce together with the noodles and it will taste better!

The noodles were very springy, chewy and savoury, which is something different from other wanton noodles. I mixed some chilli together with the noodles as well! The char siew (the meat with the red skin) was sliced thinly and they were already considered generous with the serving of it. Comparing to other char siews, this consisted of more meat rather than the fats, and I love that because I prefer meat with no fatty bits.

The boiled wanton is not my favourite but that is because I tend to skip eating it! I prefer fried wantons to the boiled ones, and oh my, the fried wantons here are on a whole new level of tasty! 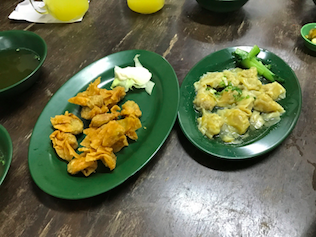 The one on the left is the fried one and the boiled ones are on the right. Wantons are filled with pork meat by the way!

The fried wantons here are served with mayonnaise and I really believe that mayonnaise goes well with everything! The wantons were so crispy that you can actually hear it when you were chewing away at it. 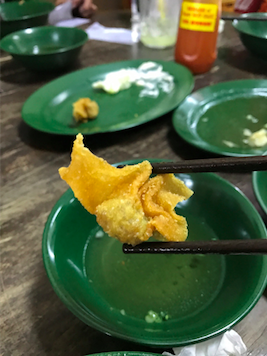 I shall dedicate a page to the picture of a fried wanton haha.

And yes, I am the one responsible for clearing the plate of wantons as seen in the background. 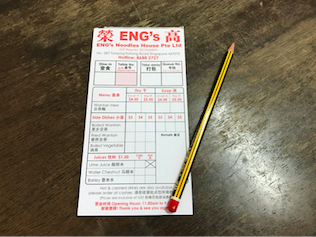 You basically just write down everyone’s order, and then head over to the counter to make payment. The prices are as seen in the picture! 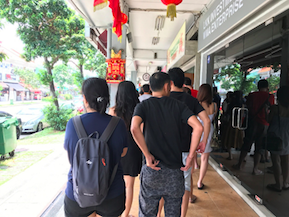 If you are planning to come down during the weekends, please do take note that the queue will be long! We waited around 15 minutes, and we went on a Sunday. So be prepared to queue! 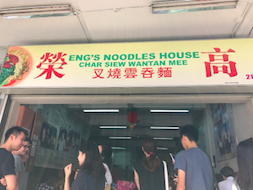 I highly recommend this place! It is a MUST try!