After an entire day spent at Orchard, Travis decided to send me home and we took the bus 175 opposite Cineleisure Orchard. I had quite bad motion sickness and decided to get off a few stops before where I was supposed to alight and we decided to walk the whole way back to my house. As we were walking, we came across this highway and Travis saw that there were a lot of people queuing under the overpass. We were curious and decided to head over and see what the fuss was about (typical Singaporean behaviour.)

As we got closer, we realised that it was actually an event, which was quite surprising because usually, in Singapore, the overpasses are empty. So this was pretty unique.

The ambience was very cosy yet cool; it felt as if we were invited to a super underground party. There was not exactly a lot of people from the looks of it, but it was still buzzing with activity.

The picture that shows a truck is actually a food truck, and they sell finger food like small burgers and fries at prices that start from SGD 4.

As we went in further, this little table caught our eye. It was littered with many different coloured masking tapes and we were able to make anything we like using those. There were many masking tape ‘drawings’ that can be seen in the pictures above, my favourite one is actually the Yin and Yang one! 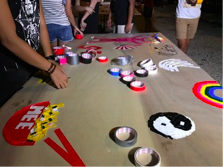 This was what Travis did, not going to lie, it actually looks cute!

There was also a small tattoo parlour set up, and we went in and took a look. There were actually people getting a tattoo over there and we eventually found out that the tattoo parlour is a popular one.

Just opposite, a DIY candyfloss stall was set up and we could actually make our own candyfloss with the help from the staff there! How cool is that?! 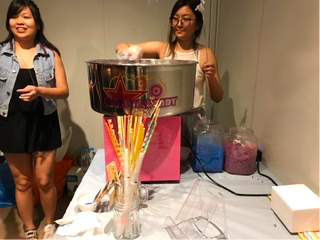 We bought a lightsabre candyfloss stick instead of the regular one offered and it actually lights up! 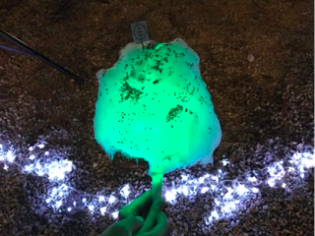 There was also a live band performance and a video series played that was projected above on the bottom of the highway, so we could lie down and watch it. There was a huge mat and bean bags and cushion so everyone can make themselves at home.

It was very comfortable and inviting!

Drinks and foods are also sold there, but sadly I did not manage to take pictures of that (I was having too much fun and forgot).

It was a really fun and special experience because it is not every day that you chance upon these types of events.

This event is by an online store called The Local People that serves as a platform for new and young brands to sell their merchandise.

Do try to make it for their events as it is really unique and you may find some very creative souvenir there!