Whenever you hear people talking about Korean cuisine, the first thing that comes to mind would be; Kimchi, Korean Barbeque (K BBQ for short), or Bibimbap. Those are what Korean dramas have taught us. However, today I will be introducing a brand new restaurant that has made their debut in Singapore and is popular right from the start! So what is it about the Chir Chir (pronounced Chi-re Chi-re) Fusion Chicken Factory that sets it apart from its Korean counterpart? The secret lies in the name of the restaurant: Chicken. 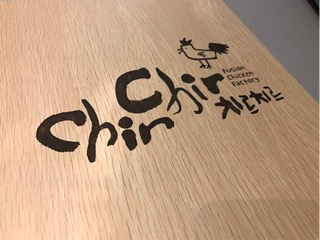 Chir Chir Fusion Chicken Factory originates from Seoul and specialises in chicken. From deep fried Korean style chicken to BBQ roasted chicken, they have an extensive menu for you to choose from!

My mum, her friends and I went to the outlet in Jem. At first glance of the menu, you may be shocked. Prices for a plate of chicken were SGD 26.90, or even more! I thought that the pricing was ridiculous at first and that I would not return after trying that place out. However, I was actually quite pleasantly surprised by the first dish. The Cajun Chicken Salad was served on a huge plate and the fried Cajun Chicken were set on a bed of fresh greens that looked particularly delicious with the special dressing. It was topped off with shaved cheese! The lettuce was particularly crunchy and fresh, and I could almost imagine the chefs plucking one fresh lettuce out of the garden behind the kitchen! When paired with the lettuce and the special dressing, the chicken tasted delightful. It was also tasty on its own!

After the Cajun Chicken Salad, it was quickly followed up by Cheese Toppoki, which was Korean rice cake that had a ton of cheese and bacon! I tried it and it kind of tasted like potato salad to me, but still delicious nonetheless.

Next up was something that I had been dying to try ever since I saw it on the menu, the Macaroni and Cheese! I thought that it was quite unique for a Korean restaurant to serve up a Western dish and I expected it to be the same mac n cheese I always ate but surprisingly, the cheese was different! It had a bit of a milky taste to it and it was super creamy as well. It wasn’t the type of mac n cheese you would get tired of after eating half of it.

The fourth dish was not exactly my favourite because I don’t really like sweet stuff or desserts. I am not sure what it is called because I did not pay much attention to it and I’ve only tried a bit of it, but the smell of it was pretty strong. It smelt like cinnamon and sugar and it was not something I liked because they had sweet Toppoki and cranberries and I thought it tasted a bit weird for me. Also it really looked like chicken but it wasn’t so maybe I didn’t like it because the smell and taste was so different from the way it looked.. But I think this would be really popular amongst those who have a sweet tooth!

On to my favourite; CHICKEN!

We ordered 2 plates of chicken, one is the Spicy BBQ Roasted Chicken and the other is the Rosemary Chicken.

Let’s start off by saying the Spicy BBQ Roasted Chicken tasted so good I would have finished the entire plate by myself! But that is impossible because the servings of the chickens are HUGE. I’m not even joking!

The chicken’s sauce really made the dish. Do you know how sometimes the spiciness of sauces can just strip the flavour of the chicken until you can only taste the spiciness? For this, it didn’t happen, despite the sauce being spicy.

The Rosemary Chicken I really love as well, the taste was very unique! I don’t really know what else they have inside but you could tell that the chicken had been all marinated to perfection before being cooked!

You definitely CANNOT finish everything if it’s just you alone, or just 2 people. You will need a bunch of people, maybe 5 or even more because portions are just that big! Even with my mum, her 3 friends and I, we couldn’t finish everything we ordered! So do bring a group of people to avoid wastage of food!

I think that overall, for the steep price point (SGD 24.90 to SGD 32.90) the dishes were pretty good and it’s not every day that you find Korean Cuisine influenced by Western flavors but yet still retaining their Korean roots. Do give Chir Chir Fusion Chicken Factory a try, if your wallet permits.