As we are slowly slipping into the middle of the year again, it is Ramadan season, whereby all Muslims worldwide commemorate the first revelation of the Quran by fasting. During this period of time, Singapore has an annual Geylang Serai Bazaar, which sells everything from food to makeup!

Over the years, it has become a trend for the younger generation to visit the bazaar because of the increasingly popular “hipster” food found there. This year, we have quite a few contenders!

I heard quite a lot about the handsome burger (yes that is the actual name) and I wanted to give it a go! It was highly recommended by so many local bloggers and Youtubers that I was willing to stand in line and wait for almost 40 minutes. But the 40 minutes was well spent because the burger was delicious! The buns were actually rainbow coloured, which is cool and unusual and it had just a tinge of sweetness to it. The beef patty was made and grilled on the spot, so it is super fresh and there was also melted cheese atop the patty. The combination of flavours were so unique and to be honest, ordering 1 just was not enough!

Travis and I also ordered the cheese fries with beef and it tasted good too!

We tried other food as well but to be honest, the most memorable food there was the rainbow handsome burger! 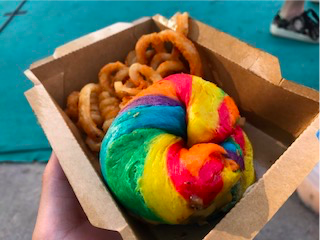 Other special creations we tried were all of these:

This chickone is actually quite amazing, we eventually went back to get another one because I kept eating Travis’s one and he was annoyed haha! Everything was made on the spot so that it is fresh and hot and tasty, but the trade-off was that you had to wait quite some time for it to be prepared! 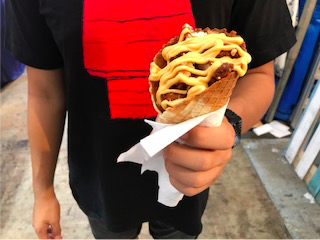 This drink bucket was one of the coolest (literally) and biggest ones I have ever seen and it is way worth your money compared to the unicorn drinks! It is perfect for 2 or more people to share. 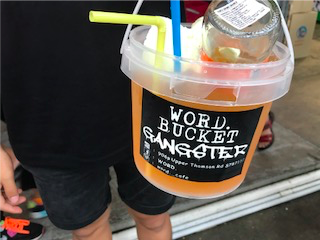 This pokeritto was alright, it was nothing too special but it did remind me of a giant sushi though.

Overall, I do hope that foreign visitors would come to the Geylang Bazaar at least once to just enjoy everything there and try out new things while getting to know more about the Muslim culture!

One thought on “Geylang Bazaar”