The very first time I tried the Western food from Collin’s Grille Bento was in Hougang, when I went over to Travis’ place to have lunch with him. He introduced the little shop to me and I ordered a carbonara. Sadly, I was unable to find the picture of it!  A few months later, I was at Clementi and noticed that in the coffee shop near my previous school, Collin’s Grille Bento had actually opened! I went there more than two times that week for lunch and dinner!

What exactly is so special about this place? The menu they have is rather extensive and there are even Japanese dishes on their menu! The founder of Collin’s Grille has had 15 years of experience in the culinary world and the Collin’s Grille is opening branch after branch. So far, there are 3 restaurants and 15 coffeeshop stalls in our little red dot. Sounds impressive right?

I was back at Hougang just last week for dinner with Travis and his parents and we decided eat at Collin’s Grille.

I ordered my absolute favourite dish there, the Premium Grilled Dory Fish with black pepper sauce with Aglio Olio and 2 sides, which were corn and salad. But I changed the corn to potato salad instead.

The waiting time was fairly quick considering it was during the weekend at around 6:30 pm.

I picked up the food and I was soon salivating (not really) over it. The aroma of the freshly cooked food just sent my stomach growling and I tucked in.

Oh my, I almost forgotten how good it tasted.

Just take a look at the grilled fish. It is grilled just nice, not too much. The fish was slightly crispy on the outside, and slightly soft on the inside. It was easy to cut the fish up! Also, the black pepper sauce gives the fish flavour without being too spicy. Aglio Olio is one of my favourite pastas EVER, and it is safe to say that Collin’s Grille makes the BEST Aglio Olio I have ever tasted so far.  It wasn’t too salty, or spicy, which I think is the most important when cooking Aglio Olio. Too salty and it just would not taste good. Too much chilli will just rob the taste of the pasta. However, Collin’s Grille has struck a perfect balance between the two!

And the potato salad was to die for. It was not overly soft and mushy like some potato salads and the sauce was just perfect. It had a slight tinge of sweetness and sourness that brought the dish together. As for the salad, typically I am not a fan, but I actually liked this one. The vegetables were fresh and crunchy and were drizzled with sauce that was just the right amount of sweetness. I absolutely loved this dish. If I were stuck on an island and could only eat one dish for the rest of my life there, I would pick this one; hands down, not a second thoughts given.

So what are you waiting for?! Locate your nearest Collin’s Grille and try them out! 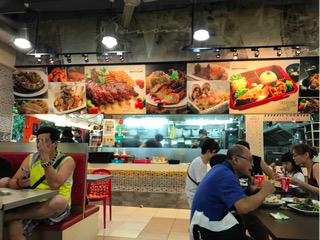