Seafood has been getting so much craze lately, starting with the Korean style seafood tower. I saw Facebook posts of something new recently that has the seafood all in 1 big pot instead of the tower and the portion looks so much more than the tower at an even cheaper price. There is also a 20% discount if you visit on your birthday and 15% on the rest of the birthday month.

There were 3 of us so we ordered the smallest seafood combo that is stated as serving size for 2-4 person. The restaurant does serve other dishes by the plate but the combo is of course their signature dish.

Initially we assumed that it wouldn’t be filling enough just by eating seafood and we are so wrong. I can’t imagine how 2 person will be able to finish a whole pot themselves because we have leftover, think 4 person will be great for the small pot.

The portion is really quite generous and definitely more than enough for their suggested serving for 2-4 pax for the small pot.

The small pot costs $138.80 ++, assuming you have 4 people sharing that will be around $40.80 after gst and service charge which is pretty reasonable I think and will be even better if you or your friends can get a birthday discount. My only complain is how expensive the drinks are. A can of soda will cost you $3.80 and above before gst and service charge which is kind of ridiculous, agree?

The were generally friendly and attentive. The lady who served us took the time to explain to us the different soup options for the seafood combo and recommended us based on what our taste are like. Removing a star because when we went it wasn’t busy at all so I can’t speak for if service will be the same standard when it is packed.

We were each given a packet which consists of chopstick, tissue pack, wet tissue, and pair of gloves which I thought was really nice and smart to have them pre-packed like that as it also saves time for time having to assemble the sets all the time, just grab and give.

We went for the mild spicy soup base that actually tasted similar to mala but a lighter and less spicy version. The seafood all taste fresh to me. I especially like their oyster which is plump and doesn’t smell bad at all, the lala which is a lot bigger than the ones I’ve had, and also both their crab which has roes.

The soup definitely tastes of MSG so that is the downside as it makes you so thirsty after. Another thing I didn’t like is how overly sweet and rich the soup gets as the pot continues to boil and while some people might love it, it made all of us feel kinda sick at the taste. The crawfish or mini lobster was kinda disappointing as there wasn’t really much meat in it and taste like prawn but it is my first time eating crawfish so maybe it is this way?

Will I go back again? Sure, but its not something I will be craving for within a short period of time.

They have free play machines! I only saw 2 and they are Street Fighters and Super Puzzle Fighter. Pretty awesome side perk, so old school and brings back memories. 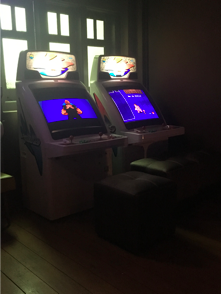